According to a recent article, as flashy glitz and glamorous products are beginning to appear 'over the top', exotic skins have become a great subtle substitute that strieks a balance between 'not boring' and 'not offensive'.

"Choices go from exotic leathers like python skin and alligator skin to ostrich skin and lizard skin. There are a lot of exotic leather -inspired printed fabrics out there, too.

People are drawn to the look because it's "discreet luxury," says Colleen Sherin, senior fashion director at Saks Fifth Avenue. She sees consumers pulling back from ostentatious embellishment in favor of pieces with a longer life, and that goes for the wealthy, too.

"If we're talking about the real thing, they're investment pieces. You buy them for quality and longevity — a crocodile leather, alligator leather or ostrich leather shoe or bag — you'll truly have it forever, and you'll be able to pass it down to your children, nieces and nephews. Even the rich are thoughtful about how they spend their money," Sherin says.

And for those who cannot afford the real thing, the mimicking leathers and quite sexy prints are good stand-ins, she says.

"It's a trend because it's available to everyone," she says.

Yes, exotic skins and their less expensive cousins are widely available, agrees Jana Matheson, creative director of Judith Leiber, but it's still an "insider" look, which, of course, seems to make it all the more desirable.

The leather bags at Leiber run $195-$795, while genuine exotic skins can cost several thousands of dollars.

"Exotic skins are a secret luxury. It's an insider club," she says. "If you understand skins and know what you're buying, you don't have to show off. If you have a brown, beaten-up piece of luggage that happens to be croc, an innocent bystander wouldn't know it, but you would — and your friends might."

Some of the most exotic exotics she's worked with include teju lizard skins, stingrays, tree snakes and frogs, which, she explains, are so small they're used for small pieces and even then they need to be pieced together. "They are pretty inconvenient," she says.

Matheson says there isn't a single customer for the look because there is so much variety: suitcases, evening bags, belts and shoes. You can have any color of the rainbow, turn them metallic, paint them or bleach them so there are no natural markings, just the texture.

The trend in handbags has been clean, simple silhouettes, but now there's a bit of a backlash, says Shelby Kruzhkov, director of merchandising for handbags and small leather goods for retailer Henri Bendel. "I think we're eventually going toward embellishment again, but now, in the interim, interesting materials have become the most important thing."

Ostrich skin and stingray skin looks "very luxe and classy" and instantly elevate an otherwise simple outfit, Kruzhkov says, while snakeskin, crocodile and lizard skins can easily be incorporated into a 24-hour wardrobe, from day to night. The wearer can treat them as a seasonless "basic," even though they are eye-catching and fashion-forward, she says.

Clutch handbags are probably the most popular exotics accessory, but a satchel, suitcase or tiny evening bag are popular, too.

"There's the fantasy of where you can go with these or where you've been. Skins just say 'adventure.'" 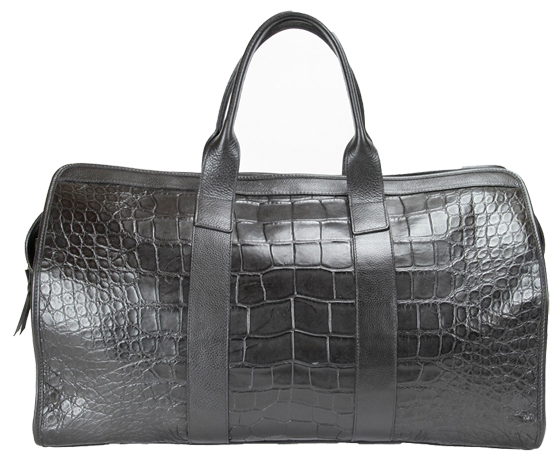