Top 5 Best Exotic Leathers to Use for Belts 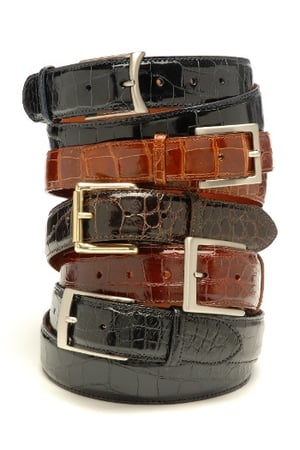 Leather belts are a fashion stable for both male and female fashion buyers. The right belt can complete an ensemble, complementing the rest of your outfit.

Yet, belts are treated as an afterthought by some designers, rather than as a complement to a fashion design. When you’re creating bold and striking fashionwear, pairing that unique vision with a plain leather belt can feel like a missed opportunity. And, it is.

Exotic leather can help turn a simple, even boring accessory into an integral part of a fashion statement, a focal point to help make sure that the entire outfit works as a whole.

But, which types of exotic leather make the best belts?

Alligator skin make the higest luxury belt. It is available in sizes large enough to accommodate several belts per hide which makes it cost efficient. Although alligator skins are large, alligator skin belts are typically made of several strips of alligator joined together (typically around 3 strips per belt). This mitigates waste which is critical since the alligator skin is so expensive. The scaling pattern of the alligator’s hide creates a visually distinctive piece that is immediately identifiable from common cowhide belts. Distinctive, luxurious, and popular as a mark of prestige, alligator skin makes an excellent belt material.

Another visually distinctive skin, python leather is an incredibly popular choice of material to use in a variety of fashion accessories, particularly belts and handbags. Like alligator leather, python skins are available in a variety of sizes, with many hides being long enough to accommodate belts of almost any conceivable size from a single cut. Front cuts may be the best option for these hides so you have a uniform scale size. Depending on the thickness of your belt, a single python hide is usually enough to produce several belts. Python skin and lizard skin belts are typically the most affordable type of exotic skin belt.

Available in a variety of finishes and colors, lizard skin can grant a belt a subtle texture appearance with smooth, bleached and dyed gloss finishes, or an intricate, ring-patterned appearance with natural, unbleached finishes. Lizard is a popular choice with people less comfortable with the louder scaling patterns of the crocodiles and the snakes. The lizard scales are more subtle. However, since the skins are small, lizard belts are made of several joined strips. Material not used for the belt can be made into fashion accessories such as bracelets, wallets, watch bands, or other small items.

A less expensive cousin to the American alligator, caiman crocodile skin is an excellent high-fashion belt material choice. The most common parts of the caiman skin used for belts are the tails and the flanks which are long and have uniform scale shapes, making for a cohesive belt aesthetic.  Because caiman skin is bonier than alligator hide, the belts are a bit firmer but also have a rugged and earthy aesthetic feature resulting from the calcium markings. Similar to the alligator skin, these belts are typically made of joined strips. They are not quite as expensive as the alligator skin belts but more expensive than lizard skin and python skin belts.

Full-bodied and flexible, ostrich skin is a durable and attractive material for those who want some luxury from their fashionwear. Available in sizes up to 18 square feet, ostrich skin is more than large enough to make multiple belts both large and small. It’s worth noting that only about 2/3 of each hide will be the “full quill” portion that has the distinctive bumps. As such, you may want to find alternate uses for the “no-quill” portion of the hide, either on the tabs of the belt or in other small leather goods. Cost-wise, ostrich skin belts are typically in line with caiman skin belts (at 2016 market prices).

Any one of these exotic skins can help raise a simple belt into something much more fulfilling to design and execute, not to mention wear.

Get the materials to make a beautiful exotic leather belt today!