What is So Special About the American Crocodile Skin? 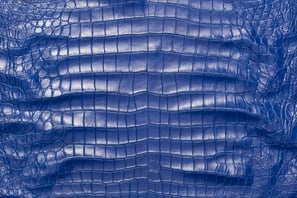 Pan American Leathers is dedicated to providing top-quality exotic leathers from ethical and sustainable sources. One of the popular emerging exotic leather options is the American crocodile skin—otherwise known as the “acutus crocodile” or scientific name of crocodylus acutus.

Here is a bit of background information on American crocodiles:

Where Do the American Crocodiles Used by PanAm Come From?

The native habitat of the American crocodile is the southeastern part of the U.S. as well as some parts of Central and South America. More specifically, according to data cited by the Everglades National Park Florida website, members of the species crocodylus acutus:

“Inhabit coastal areas of south Florida where they are at the northern extreme of their range. American crocodiles also can be found on the islands of Cuba, Jamaica, and Hispaniola, as well as along both coasts of southern Mexico and Central America, south to Ecuador on the Pacific coast of South America, and Venezuela on the Atlantic coast.”

The skins that PanAm Leathers processes come primarily from captive-bred crocodile farms in Colombia. Using farmed crocodile skins helps to ensure the highest possible quality of exotic leather, as there is less risk of the crocodiles getting into fights with wild animals and being hurt.

American crocodiles are often compared to other crocodilians, such as the American alligator, caiman, Nile, saltwater, and siamese crocodiles. Here are a few quick comparison points for each:

Some other key differences that reinforce the acutus’ usefulness for garments are that they are farmed to larger sizes than other species and the square belly scales are a larger percentage of the midsection versus the circular flank scales, relative to other crocodiles. Large, clean skins and square scales are both very desirable qualities for crocodile skins being used for garments.

Are There Restrictions On American Crocodile Leather?

Yes. At this time, American crocodile leather is not approved for import into or trade within the USA. PanAm stocks these skins in our Paris showroom for purchase in person or through our European online shop. We can also ship from Paris or directly from our tannery in Bogota, Colombia to almost any other CITES-member country.