A Brief Overview of Python Skins

In many of our recent blog posts about high-end handbags, we’ve discussed the use of python skin. In those posts, we discussed how python skin makes for a great material to use for large fashion accessories.

However, what we didn’t mention earlier was that there are actually three different species of python that are frequently used for exotic leather. They are:

Each of these python species have their own distinguishing characteristics that separate them from one another, which we will discuss in brief here. 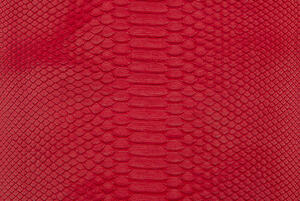 The short tail python, which has the scientific name of Brongersmai, is found in western Malaysia, Sumatra, and several islands in the Strait of Malacca, preferring marsh-like tropical swamp environments.

Averaging a length of 1.6 meters and a width of 28 cm in the center and 15 cm at the ends, the short tail python is smaller than the other python species. However, the hide of a short tail python possesses a full-bodied thickness with only slight tapering, meaning that the yield for a hide of a given width will be relatively high.

The center belly scales of the short tail python are relatively wide, making a great focal point for an exotic leather piece. Currently, these hides are only available in a back cut bleached style. This shows off the wide belly scales, and ensures that the hide will be free of natural markings.

The Burmese python, also known by the scientific name of Python bivittatus (it was once considered a subspecies of python molurus, but has more recently been recognized as its own unique species). The Burmese python is natively found in Southern- and Southeast Asia. In recent years, the Burmese python has also begun to spread throughout the southeast United States as an invasive species, displacing or threatening other animal species native to the Florida Everglades.

The natural markings on the Burmese python are more random than other python species, and a little more rounded in shape. The hide of the Burmese python is also relatively thin, making it ideal for garment pieces where thick material would otherwise have to be shaved down.

Because the hide only tapers slightly until you near the ends of the skin, the yield for these skins tends to be high for their width. However, combined with the high demand for Burmese python hides, this means that you can typically expect to pay a little more for these hides than their counterparts.

The scales of the Burmese python’s belly are relatively narrow compared to the other two python species on this list. 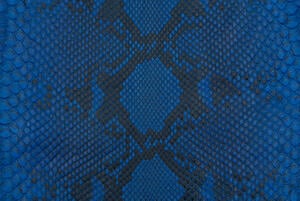 Native to Southeast Asia, the diamond python grows anywhere from 3 to 6 meters long, and 25 to 60 cm wide. The average size for commercially-available skins tends to hover near 3.25 meters long, and 28 cm wide in the center.

Similar to the short tail python, the diamond python has wide center scales, making them stand out in exotic leather goods.

In the coming weeks, we’ll be adding more blog posts that talk about each of these three python species in detail, so check back with our blog later for more info.

If you need to know more about our exotic python skins right away, contact Pan American Leathers today to learn more, or check out our guide to python skin for free using the link below.